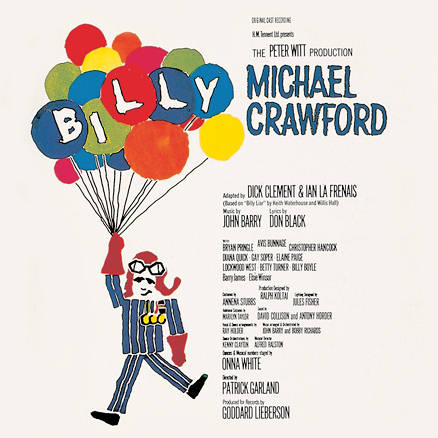 The musical, ‘Billy’, is based on ‘Billy Liar’, the novel by Keith Waterhouse. This had already been a successful stage play, starring Albert Finney, and an even more successful film with Tom Courtenay. In this musical version (with lyrics by Don Black and music by John Barry) the working-class Yorkshire lad, Billy Fisher, a Walter Mitty fantasist, was played by Michael Crawford. Michael was at the peak of his TV stardom as Frank Spencer in the sitcom ‘Some Mothers Do ‘Ave ‘Em’. So ‘Billy’ was tipped to be a hit. I created the role of Rita, a brassy, no-nonsense girlfriend. Rita was a loudmouth, and I discovered I had the voice to match, able to sing “Any Minute Now” without a microphone. To balance the sound, however, the newly invented body mike was used by all of us. ‘Billy’ was a triumph! “The most successful British musical since Oliver!” said the Daily Express.