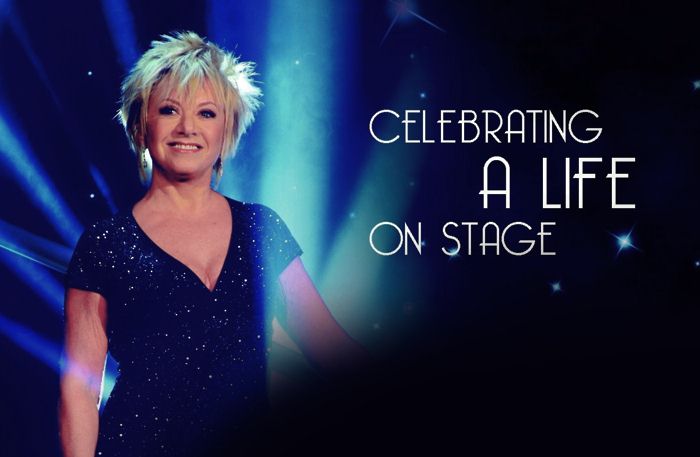 Originally released in March 2010, Elaine’s first ever DVD is being re-issued with brand new front cover artwork on the 24th September 2012 {the Region 2 DVD can be ordered now from amazon.co.uk}.

Filmed at the State Theatre in Sydney, Australia during Elaine Paige’s sell out 40th Anniversary tour, her first ever in concert DVD Elaine Paige Celebrating a Life On Stage captures the magic of this thrilling live performer as never before.

From her beginnings in the musical Hair Elaine Paige takes the audience on a journey with performances from Evita, Chess, Cats, Anything Goes, Piaf, Sunset Boulevard, The King & I and many more from the West End to Broadway. Elaine also entertains us with amusing and enlightening anecdotes from her illustrious career.

New songs to Elaine’s repertoire are Lennon & McCartney’s Yesterday, Shoot the Breeze (written by Bette Midler & Dustin Hoffman), Stephen Sondheim’s By The Sea, and Small Packages, a song specially written by Stiles & Drewe (Mary Poppins, Honk!) to celebrate this 40th Anniversary concert. Also featured is the first lady of musical theatre’s greatest hits, many recreated in costume here for the first time ever on DVD. With One Look from Sunset Boulevard, a vignette of songs from her critically acclaimed West End production of Piaf, complete with Elaine’s own signature Memory make this a captivating collection of performances from a remarkable career.

Also included on the DVD is a comprehensive interview with Elaine giving the viewer an insight into the process of playing some of the most fascinating women in modern musical theatre history. And as a bonus Elaine performs a song by one of her favourite composers, Jim Webb, entitled Grow Young which can be found on her contemporary album Love Can Do That.

For those who have attended Elaine’s live concerts this DVD will be a wonderful souvenir and for others it will give them a chance to witness this outstanding and legendary performer doing what she does best.

Recently on EPOS I relayed a news story that @The_Globe were handing out warnings for Romeo & Juliet. I’m so sorry we didn't realise it’s part of their visual story for some patrons' benefit at relaxed performances. Find other relaxed performances at http://shakespearesglobe.com

It's so wonderful that the theatres on Broadway are making their "return, to those wonderful people out there in the dark!" We’ve missed you!
@Broadway #ThisIsBroadway